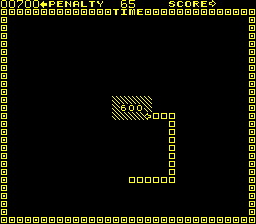 Hustle is a 1977 game by Sega/Gremlin on Sega Blockade hardware that is effectively Snake except that the normal pellets are replaced with larger pieces containing various point values that you get if you touch the piece before it disappears. Multiple pieces may also appear at once. You have one life; the game ends either when you hit yourself/a boundary or run out of time (the operator is presumably able to change how much time you can play for).

In Hustle the player directs a snake-like object moving around the play field. Each game lasts for 90 seconds. Periodically, targets will appear with a point value. You must aim for the target while avoiding your opponent's tail - and your own.

One or two players can play simultaneously. You also have three options pertaining to your targets - a normal game where target values don't change, a countdown where the value slowly falls, and a count up where values slowly climb and delaying can increase your score. There are also three skill levels that alter the speed of the game and the intelligence of the computer player.

Reviewer: Stepnasti - favoritefavoritefavorite - February 2, 2017
Subject: Snakey
If you like snake, this is your game. Also, hitting the TAB button allows you to change options, same for many of these games in the library.

Uploaded by Jason Scott on September 9, 2014